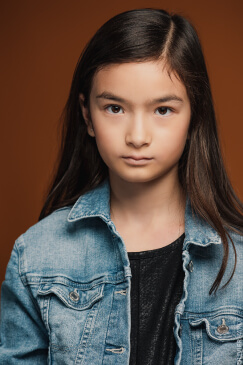 Laeticia Ho is non-union, female/girl, real child/kid voice over actor, based in Montreal, Canada. She is perfectly bilingual in English and French. Laeticia speaks English with a neutral North American accent. She is also a native French speaker, and offers accents in both Canadian/Quebecois French, as well as European/French from France.

Laeticia has very strong acting and performance skills. Although only in her early teens, Laeticia already has a significant amount of acting experience and a ton of training under her belt. She started with basic acting classes at five years old and some on-stage performances.

She then progressed onto on-camera training and performance, and finally into the world of voice acting. In addition to voice over, she has some on-camera credits including some short films and a corporate video.

Extremely versatile, Laeticia’s voice and performance age ranges from a young child of about 5 years old, to someone in her mid-teens.

Laeticia can offer sassy reads with attitude, and can pivot to warm, emotional reads and beyond. She’s also super articulate. She’s a true actor, who is able to delve into emotions and characters. Laeticia has a comedic side and loves to make people laugh. When you want a true Gen Z voice, look no further, she has the authentic attitude and tone. Laeticia is also a natural instructor and has experience voicing online learning projects geared towards other children.

She may be young, but Laeticia is super professional and easy to work with. She is also easily directable.

Well, everyone always says that Laeticia looks like her mom, like EVERYONE. As well, they have many of the same interests, including voice over. And of course, they love spending time together, inside and outside of the booth! Laeticia and her mom work out of their professional studio in Montreal, Canada. To learn more about Laeticia’s mom, Theresa, please click here.

Laeticia’s name is pronounced LAY-TEE-SEE-YA. It is of Latin origin and mean “happiness” and “joy”. And she definitely brings a lot of that to her family and friends.

Laeticia is of mixed ethnicity: half Chinese and half French Canadian/Québécoise. She speaks both English and French at home and in school on a daily basis, and she also speaks beginner Spanish.

As a young creative and artist, Laeticia is also busy as a figure skater and classical pianist, and has recently taken up photography. In her free time, she’s like any other kid and enjoys playing video games and hanging out with friends. She loves K-Pop, dancing, arts and crafts and travelling with her family.

Laeticia is super easy to work with, even at such a young age. She is an easily directable voice talent and can portray a great variety of real characters such as a sad toddler, a happy child, a bully, the popular girl and the list goes on. She can provide reads that are warm, casual, natural, trustworthy, confident, bored, cool, humorous and so much more.

Laeticia offers a quick turn-around time from her broadcast quality professional studio, where all of her demos were recorded. She is available for live-directed sessions and to connect via Source-Connect, Skype, Zoom or any other of the client’s preferred platform.

Laeticia (and her mother) were fantastic to work with! Laeticia is very talented, and they were highly professional and communicative throughout the process. I hope to collaborate with them again!